Wondering how to make a positive impact on our environment? Driving or ride-sharing in an electric car or bus are easy answers. With every mile driven, we displace harmful tailpipe emissions that impair the health of humans and the planet. 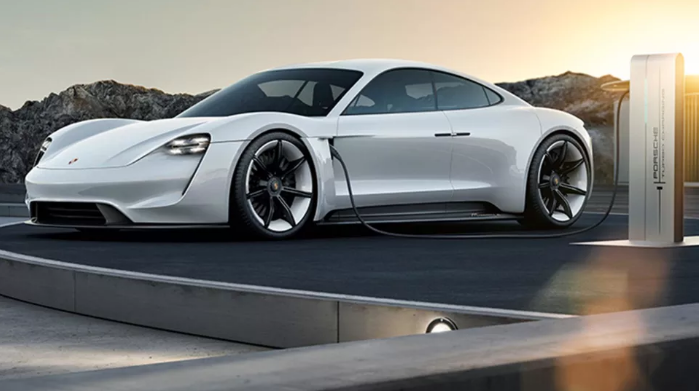 All-electric vehicles (EV) just get cooler by the day. They may soon be the fastest vehicles on the planet. While the non-electric Hennessey Venom F5 holds that distinction (top speeds over 270 mph), the all-electric Tesla Model S screams from 0 to 60 mph in just 2.5 seconds as the world’s fastest production car. And the fun isn’t about to end anytime soon with companies like Rimac Automobili building the supercars of the future, or Porsche gunning for Tesla with its upcoming super-cool Mission E.

If renting, leasing, or buying one of these beauties is not in the offing, the bevy of practical EVs keeps growing as well, including the more affordable options such as the Chevrolet Bolt EV, Tesla Model 3, and Nissan Leaf.

If you’re in the market to purchase, it’s best to consider the total cost of ownership when comparing electric and other vehicles. Kelley Blue Book’s 5-Year Cost to Own tool is a great way to help you home-in on a vehicle. With government incentives totaling up to $10,000 in states such as California, EVs have begun to be a good economic choice. The key factor that will drive down EV prices over time is the cost of battery output.

“Since the first electric vehicle (EV) prototype was built in 1828, the central challenge has been making good on a lightweight, durable battery with adequate range,” according to Project Drawdown. “In its absence, internal combustion engines have dominated the automotive landscape since the 1920s, and the atmosphere has paid the price.”

According to the 2016 annual report from EV Box, a leading electric charging hardware and software provider, “EV battery prices will drop faster. WardsAuto reports that battery prices are already falling faster than expected, and could go below the magic mark of $100/kWh by 2030… Once battery prices fall below $100 per kWh, US electric-car sales alone can grow by 1 million all-electric vehicles a year, with plugin hybrids responsible for another 1 million sales. The EV market share then, would explode from about 1% today to over 10% in just a decade.”

Under normal conditions, we should expect government incentives to continue until this mass EV adoption occurs. Pollution and climate change are driving these policies and represent a dramatic departure from past energy policies, considering countries like Germany, China, and India plan to make the switch to electric and hybrid vehicles from gasoline and diesel — some declaring an altogether imminent end to gas and diesel cars.

According to the International Energy Agency in its Global EV Outlook 2017, the global electric car stock surpassed 2 million vehicles in 2016 after crossing the 1 million threshold in 2015 (Figure 1). See chart below for the rapid growth of Battery Electric Vehicles (BEV) and Plug-in Hybrid Electric Vehicles (PHEVs). 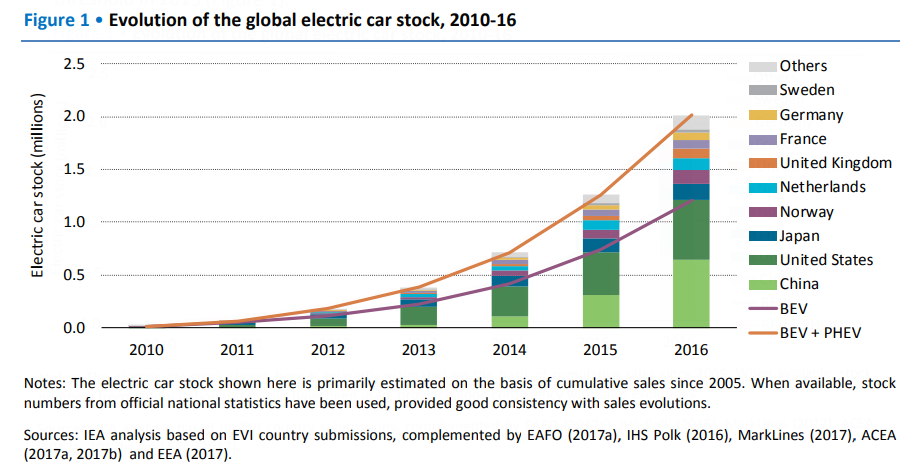 But Wait: EVs Still Have a Long Way to Go

Understanding that globally there are over 1.2 billion vehicles on the road, and about 72 million passenger cars produced each year, it will take decades before EVs fully penetrate the market. As noted by Green Car Congress, and with a less optimistic view, by 2035 “just 2.5 percent of those [vehicles are projected to] be battery electric, plug-in hybrid, or fuel-cell vehicles — the rest will run on gasoline or diesel fuel.”

Making up 14% of global greenhouse gases (GHG), transportation is a good place to focus climate-change mitigation efforts. However, faster adoption of EVs are necessary to make a collective impact on our planet’s carbon footprint. Fortunately, some cities like Palo Alto, California, know the realities and inertia of the automotive industry and are working hard to set an example for other communities with “moonshot” carbon-neutral goals, including fully electrifying their fleet of vehicles.

Thankfully as well, some automobile manufacturers are also setting examples, inspired perhaps by… the new competitive advantages of leaving behind the internal combustion engine (vis-a-vis Tesla), and a future of foreboding government regulations to shake up the status quo. Volvo announced that after 2019, every car it produces will have an electric engine, Mercedes-Benz, announced that it will be electrifying its entire vehicle lineup by 2022, and Volkswagen said it will ‘Electrify’ all 300 of its cars and SUVs by 2030.

As trend-setting as Tesla may be in igniting the wave of coolness that now favors electric cars, the onus is squarely on them now to deliver. Automating the production of the Tesla Model 3 for the mass market is among the biggest challenge being faced with the thousands of pre-order-deliveries slipping a month or more. But with favorable EV regulations, growing infrastructure, funding and tax incentives, environmental benefits, and the coolness factor all going Tesla’s way, don’t doubt for a minute that purchasers will get their cars. It’s just a matter of time. And for cool and the climate, it’s safe to say that most people are willing to wait.

Drive an EV and Spread the Word

Whether it’s the Tesla Model 3, Chevy Bolt, Nissan Leaf, or a supercar of the future, you can make an impact on the environment and your surroundings by driving or ride-sharing in an EV. You can get involved today by learning more about electric vehicles and considering to join an EV association like the Electric Auto Association or ROEV Association. You can also make suggestions to your civic leaders that EV fleets and infrastructure make sense for your community and future. And by all means, spread the word about the benefits of EVs, and together we can promote more rapid adoption. Yes, EVs just got cooler, and are a fun actionable step we can take towards a cooler climate.

If you’re new to Sustainability X, welcome! We will present solutions to the climate change crisis over the coming weeks and months, and how you can get involved. Please join our movement and follow us by clicking the “FOLLOW” link in the footer below!

Do you manage a fleet and are considering electrifying or converting it to alternative fuels?  Consider contacting carbonBLU. Their consultants specialize in developing and implementing sustainable fleet strategies, empowering you with the knowledge and tools you need to succeed.

Are you interested in managing the energy consumption of a fleet or evaluating the performance of a fleet conversion? Consider contacting GreenTraks. Review a recent GreenTraks presentation and case studies for a fleet conversion of over 100 heavy-duty refuse trucks from diesel to liquefied natural gas (LNG) and renewable natural gas (RNG), performed by the City of Sacramento.

As individuals, we have little power to stop the clear-cutting of rain forests, compel nations to end subsidizing fossil fuel industries, or keep the meat industry from promoting beef products, etc. Our power lies in collective actions from joining forces with like-minded people to make our voices heard. As individuals, while we can and should choose sustainable options over depleting ones, the truly meaningful actions to combat climate change come from supporting, and in some cases leading, initiatives and causes. Join us today and make your voice heard, take action on a cause you support, and be part of the global warming solution.